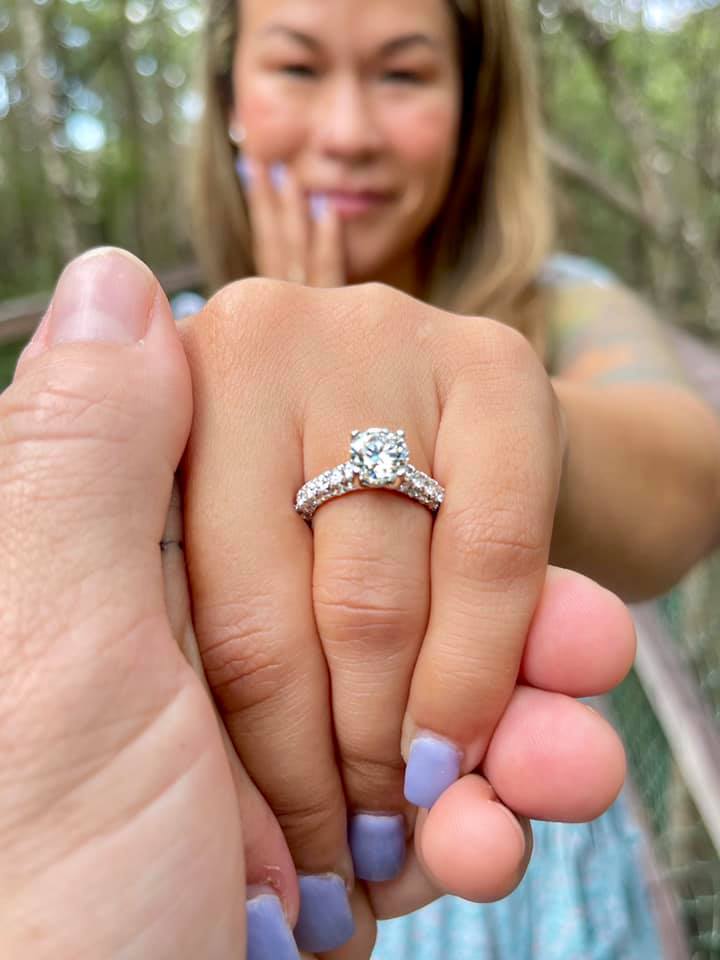 WE ARE ENGAGED! {How We Met}

In the early hours of Friday September 3, 2021 my boyfriend Scotty proposed! It was in a super intimate way and it was just the two of us. There are no videos and no pictures. It is one thing that I wanted to keep private since so much of my life isn’t and hasn’t always been. He got down on one knee and he asked me to accept him as not only my husband, but as my children’s future bonus dad. Of course, I said YES!

I had no idea about when he would propose, but we had talked about the idea of marriage. I had no idea what the ring would look like. But it was gorgeous and he got to custom make it. It was a SWANA solitaire diamond from Botswana with a Dana Augustine band with a wedding band to match for later. It was honestly the prettiest ring I had ever seen. He knew I liked simple and he liked busy-so it was the perfect combo for us.

I met Scotty when he was almost 8,000 miles away across the globe on his first deployment. I remember swiping through Bumble when I saw his profile. He was wearing blue sunglasses and looked as if he were pondering something. I actually posted the photo below haha. I later told him that he should’ve picked a better main photo that actually showed his face! But he said, hey it clearly worked. I guess it did!

I couldn’t really tell what he looked like, but I was more itrigued when I read that he was deployed and looking for someone to simply talk to. I thought to myself, why not? I can just talk-this feels safe.

So I swiped right. If you know anything about the Bumble dating app, then you know that when you match (both swipe right on each other), the woman has 24 hours to answer or message the man first. I didn’t know what to say so I simply said “Hey, how is deployment going?” Which he responded to and cheekily told me that I was flirting with the timer since I barely answered him before the 24 hour mark. At that point, the app was just entertainment, I knew the chances of me finding someone worth a damn on it were slim to none and honestly I had just reached the point where I was cool with being alone forever. So yeah, I swiped on someone who was 8,000 miles away and did not think much of it.

We began chit chatting on the Bumble app for a few weeks. Sometimes I would forget to reply. Sometimes I was short. I just did not have a lot of hope LOL. I came to find out that during that 24 hour wait to respond to him, he looked me up on social media in case we missed our chance. He was clearly more adamant that I was. Eventually, I gave him my number and we texted and got to know each other. I woke up with good mornings sent from around 1am and had goodnight texts to me sent by 2pm each day (huge time difference over there). I got used to them and they were cute.

He asked me if he could take me out when he got back home-which was still 3 months away. I did not feel like waiting. So I went out on other dates and dated other people-I did not wait for him. Meanwhile, we still chatted and I would tell him about my dates and he would tell me that he hoped they didn’t workout. I thought to myself “how rude!” None of them did, though.

Eventually, we kinda stopped texting. I wasn’t really showing interest towards him or being that responsive so he gave up. I mean, its hard to be into someone you have never met in person, right? Then I saw on Facebook in late April that he was home from deployment. I thought to myself “how rude!” and he didnt tell me? He was supposed to take me out! Soooo I texted him right away and was like “Heyyyyy you’re home?” even though I already knew and it took off from there. A few omelette pics (he sent me photos of his breakfasts for some reason-convo starters I suppose lol) and a few days later, I invited him over to my house to meet me.

He came to my home dressed in jorts and a Buccee’s tie dye shirt. (He later said he would’ve worn his multi-colored crocs if I had not made fun of him mentioning wearing those prior to his arrival-yes he actually has and wears those.) Not my usual taste of clothing style in men, but his smile was the best I had ever seen because of his beaming green eyes. And the conversation? WHOA. I felt like I was attracted to him immediately as we just sat and talked. I remember really really liking his voice. It reminded me of Matthew McConoughey which I later teased him about. We ended up talking for most of the night and then grabbing some wings. Afterwards, we played Mario Kart and the rest was history.

Now, we are engaged and I am the happiest I have been in a long while. I had to go through some frogs to find my prince. Dating as a single mom is not easy-I will write more on red/green flags in dating relationships as well as finding the good ones on those silly dating apps later on. We have not decided what type of wedding we want, but we prefer sometime later next year. We will see how things go and of course I will keep you all in the loop. Thank you for all of the congrats! 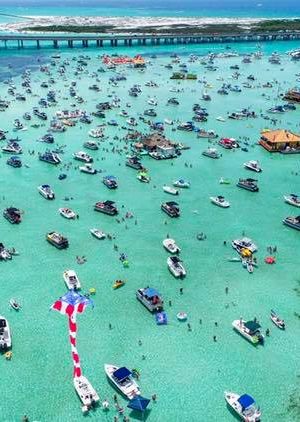 Best Things to do in Destin Florida 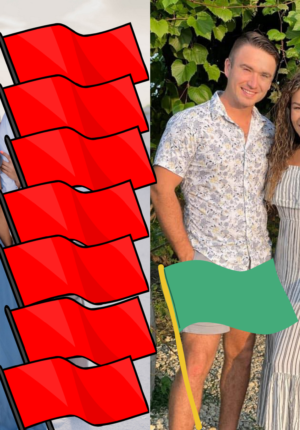